It's in the Water

In the small southern town of Azalea Springs, the country club set still rules. Here, being a member of "The League" is a must, big hair is still favored by the ladies who lunch, and only hair-dressers and interior designers are supposed to be gay. The addition of an AIDS facility in Azalea Springs has The League unsettled. And the announcement that their charity work will include contact with "those people" leaves them stunned. But the real frenzy begins with a drunken comment regarding the local drinking water. Rumor has it that the water is contaminated with something that actually "turns" people gay. Mix in Brother Daniel's "Homo-No-Mo" meetings, the local newspaper, and a group of rabid homophobic picketers, and you've got a recipe for panic. Heads reel. Women weep. Mothers, hide your children! In the midst of it all, we find Alex Stratton, a young woman dealing with a distant husband, an overbearing mother, and the tedium of meaningless society chatter and endless shoe critics. Going against her husband's and her mother's wishes, Alex accepts a job at the Hospice where she is reacquainted with Grace Miller, her best friend from high school who has returned to Azalea Springs after a nasty divorce. It is here that Alex falls out of 'grace' with society when the two are caught kissing in the Hospice supply room. Mark Anderson works at the local newspaper his father owns and regularly attends Brother Daniel's Turn-or-Burn meetings. As the rumor about the water and the protesters get plenty of front page coverage, Mark finds himself becoming involved with Tomas, a Latin house painter who mistakes the ex-gay meeting for an A.A. meeting. The events that unravel as a result of these two love affairs bear witness to what happens when hysteria and homophobia take control of their lives.—Kelli Herd 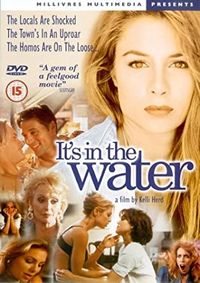