THE MISANDRISTS refers to a secret cell of feminist terrorists that is planning to liberate women, overthrow the patriarchy, and usher in a new female world order. The group is led by Big Mother (Susanne Sachsse), who operates a school for wayward girls in the countryside as a front for a radical terroristic cell. When a young man, a radical leftist, who is running from the police, happens upon this remote female stronghold, one of the girls takes pity on him and hides him in the basement. His presence eventually disrupts the household and reveals a number of unexpected secrets, as the film moves towards its climax: the revelation of a new style of lesbian porn that is to be used as both propaganda tool and calling card for their new brand of female revolution. 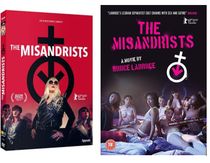