A gay man takes an experimental medication designed to make him heterosexual in this provocative independent drama. Plain-looking, unlucky in love, and approaching middle age, Tim (Jonathan Slavin) isn't very happy with the shallow hedonism of the gay world. He pines for his straight best friend Don (Mike Begovich), whose occasional willingness to accept drunken oral sex marks the closest thing to a date Tim's enjoyed in years. When news breaks of a drug trial for a miracle pill that will turn homosexual men straight, Tim jumps at the chance to enroll. His decision alienates him from Joey (Scotch Ellis Loring), his good-time-guy pal, and from Don, whose company he must shun in order to bolster the drug's effectiveness. As the treatment progresses, Tim tries out hetero sex with Sally (Susan Slome), a co-worker who's been in love with him for years. But when he spurns Sally for a better-looking new girlfriend who knows nothing of his gay past, Tim's final link to his previous life is severed. Ultimately, though, a crisis among his old friends drags Tim back into their orbit, putting his entire course of treatment in jeopardy. The debut feature from writer/director John Baumgartner, Hard Pill played the festival circuit before airing on Logo, the nascent, Viacom-owned gay cable network. 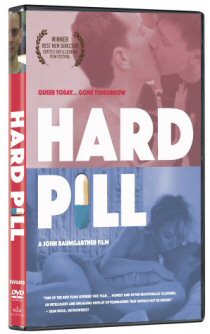